"The Rumano Solano copy of my 1767 Italian double bass is remarkable in many ways. The sound quality has innate characteristics very similar to my bass with a full, deep, rich and clear sound. It also has a projection and clarity of sound that is stunning. It fills a 1,000 seat auditorium as well as any instrument I have ever heard or played. The instrument also has an ease of playing that makes even the most difficult passages accessible." 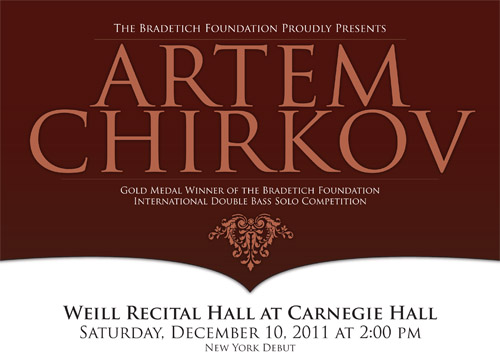 Artem Chirkov is the Gold Medal winner of the inaugural Bradetich Foundation International Double Bass Solo Competition. In addition to a first prize of $10,000, Mr. Chirkov receives a New York debut in Weill Recital Hall at Carnegie Hall, a CD recording and numerous performances around the world.

The first prize cash award was sponored by Solano Basses. At his December 10, 2011 New York debut, Mr. Chirkov will play a new instrument handcrafted by Rumano Solano and made to his specifications. You may find more information about his upcoming performance here or at the Bradetich Foundation. His CD recording, sponsored by the Bradetich Foundation, will be available at his debut concert or through the Foundation.